What do you draw

What Do You Draw?

What subject matter inspires one to draw? I gave my drawing class a sketchbook assignment to draw any 5 things outside their house. One of the students got confused and thought she was to draw 25 things. She emailed me saying there aren’t that many things to draw! I replied saying that there are at least 125 things close by her house to draw but that she only had to do 5. She said, well, yes, but I don’t really want to draw any of them. With that in mind, I went outside to see what I would draw. The first thing I came across was the ditch where my brother-in-law had repaired a leaky pipe in our sprinkler system. Was I inspired? No, but as I drew I found the maze of pipes and valves and the sides of the ditch interesting and challenging to draw. It’s a quick sketch but I hope it demonstrates that if you just start drawing, you can find interest. 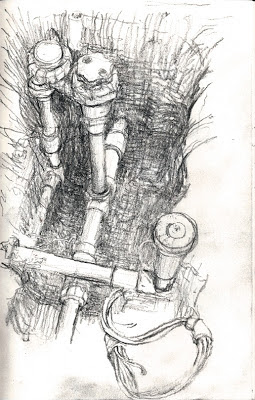 Posted by Allen Garns at 9:05 AM No comments:

The advanced drawing students I've been working with have been taught the value of tone and have learned the lesson well. I am now trying to encourage them to explore line more fully. A common misconception is that tone is the only way to create volume and mass. Tone certainly helps but the line drawing itself, when understood and used well can do much of the work. To illustrate, I did this demo for my class. 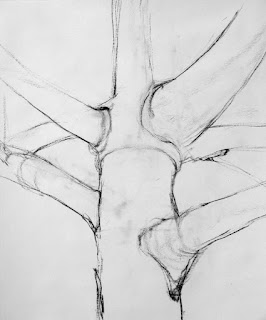 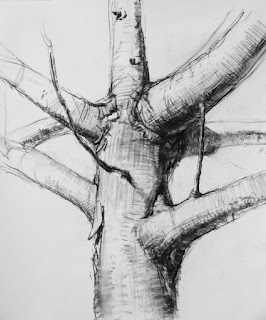 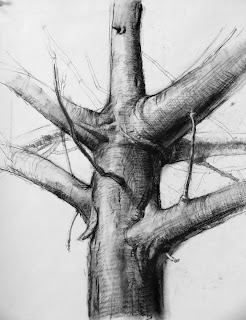 This final version shows the integration of line and tone that I tend to like in a drawing. Here is a wonderful example of what I'm talking about, a drawing by Jerome Witkin. 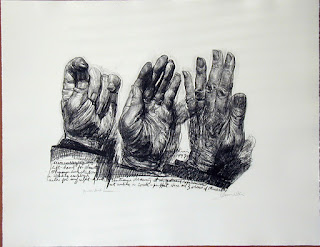 Posted by Allen Garns at 6:46 AM No comments:

Last year I worked on a few pieces for my illustration portfolio.This was the most successful. I went back to an old style I used to work with - pastel over gouache. 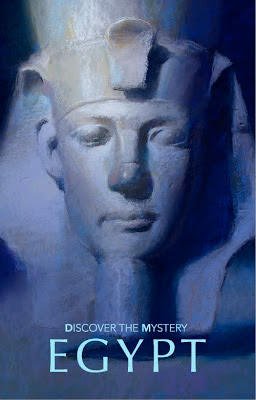 I did some other preliminary sketches, this being one that I would like to pursue sometime. 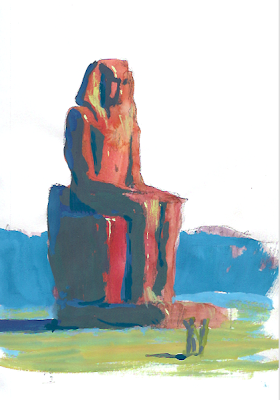 Posted by Allen Garns at 9:47 PM No comments:

Rooftops on a cold late afternoon in Downtown Mesa. 6" x 8" 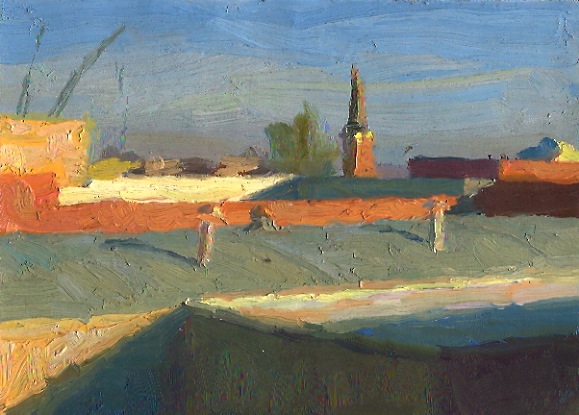 Posted by Allen Garns at 8:40 PM No comments:

Just a partially done painting of Danielle, a family friend with a great face to paint. 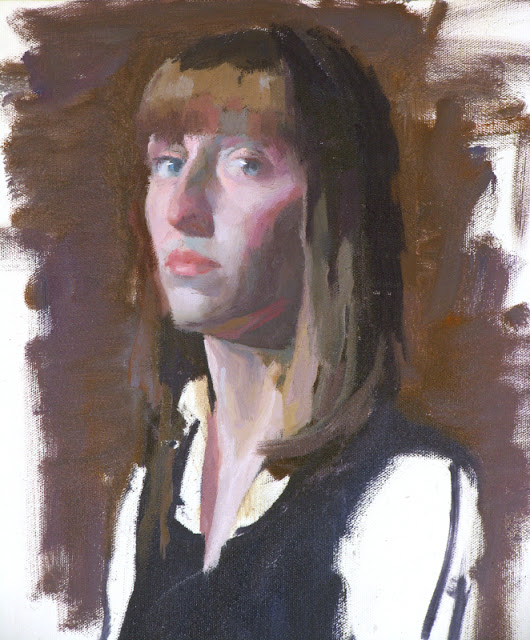 The Muse comes at the last minute…


This is a painting from a few years ago. My gallery owner suggested I do a painting of the Sugar Bowl, an old landmark restaurant in Scottsdale. I set up my easel and started painting but the muse seemed to ignore me. I had a rather sub-par painting about done when I realized some shadows started making some interesting shapes on the facade which got my juices flowing. I made a few quick strokes and took a photo before the light slipped away. I finished it in my studio and this was the result. It was purchased by the wife of the owner of the Sugar Bowl and I’m told it is hanging in the restaurant. 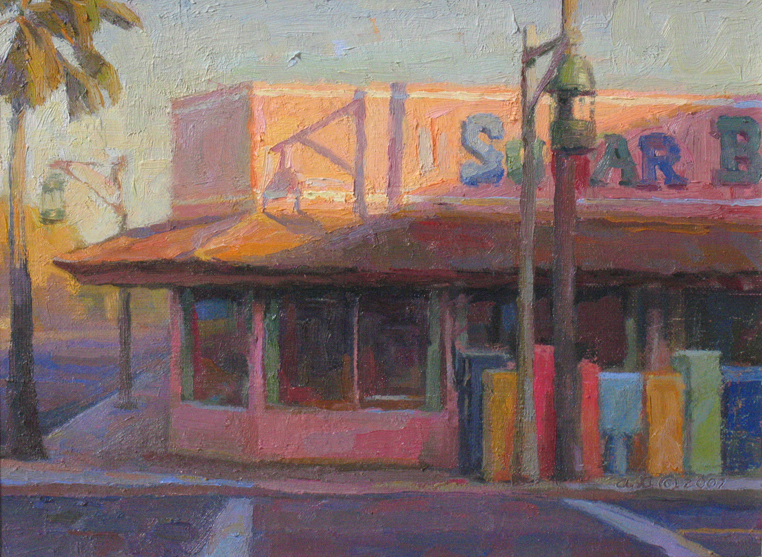 Posted by Allen Garns at 8:42 PM No comments: 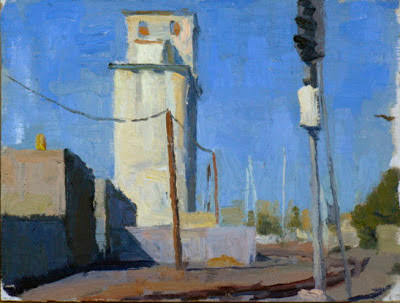 No story or explanation, just a plein aire painting of railroad stuff and a granarie. I like the composition.
Posted by Allen Garns at 7:44 PM No comments:

Some paintings just paint themselves. In this case, what started out as one of those times developed into a much more adventurous endeavor.
The Loyola was a wonderful old theater in my hometown of Westchester, a suburb of LA. As with the Globe in a previous post, I took some pictures back in the late 70’s. A few years ago, I finally decided to start a little study. It turned out to be a rich experience of color, paint strokes and nostalgia. 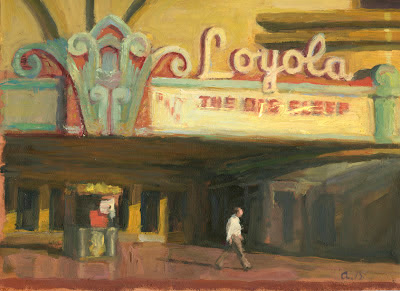 It sold quickly at my gallery to a couple from Northern AZ. Soon after, they moved to the damp West Coast. (They settled in Marina del Rey, about five miles from the location of the Loyola!) About a year later, the buyer came back to the gallery explaining that the painting was pealing off the backing! They were very respectful but said they either wanted their money back or for the artist to repaint the painting on a more permanent ground. So I began repainting. Everything was going along swimmingly until I tried to hurry up the drying process before I painted in the final elements. As I often do, I put it in the oven, raised the heat to 170, turned off the heat and let the painting sit in the “dryer”. All was well til my wife came home, decided to roast some vegetables, turned on the oven to 400 to pre-heat (without knowing there was something in there) and then got busy with something else and forgot about it. I came in from my studio a few hours later, as I walked into the house I could smell something wrong and found my painting to have a not so wonderful toasted effect. 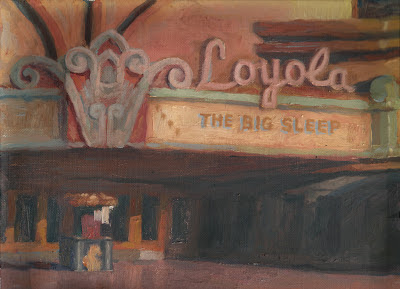 So I started for the third time. This one should have gone easily but I kept fighting to keep the spontaneity the first painting had. In the end, I was pleased with it, sent it to the patrons and they were thrilled. 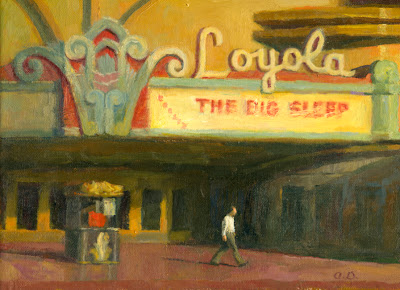 About this same time, I did a demonstration at my gallery in Scottsdale where I began another painting of the Loyola, a little different view. The demonstration went well and I thought “with a little more work back at the studio, this could be a swell little painting”. However, when I got home, I couldn’t find it. I drove back and sure enough, it was laying in the middle of the busy intersection of Goldwater and Scottsdale Blvd. I had left it on the top of my car. 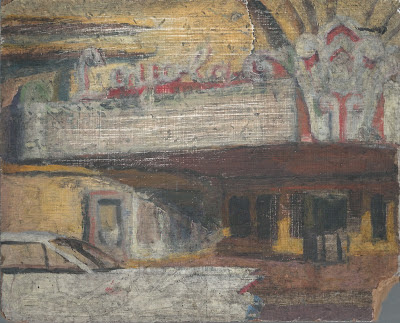 Happy New Year. Having been busy with festivities and some illustration jobs, I’ve neglected my blog, along with some other important things. Which brings me to the subject of today’s post. One of my New Years Resolutions is to post more regularly. Being self employed, I struggle with knowing what I should work on. I often find myself with 3 or 4 paintings or ideas that I am wanting to work on, self promotion that I need to do, keeping my illustration work up, updating my digital skills, posting on my blog and a host of other projects and demands. It is not uncommon for me to dither about what to do, finally decide on something and after a half hour, start worrying about another thing I should be doing and start on that and then wonder if that is really the best use of my time . . . at the end of the day I have wasted most of the day switching gears and sitting trying to decide what to do.

So! here is my solution! 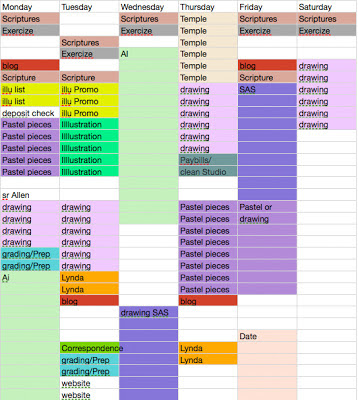 One of the values of scheduling so tightly like this is that I can concentrate on one thing and not worry about other things, knowing that I have scheduled time for them. I know, this is pretty boring, but I thought the schedule with all the color looked so cool, I would show it to you. I’m curious if other artists have the some problem and if so, how you deal with it.

Posted by Allen Garns at 6:24 AM No comments:

A couple of studies for a street scene. These are done using an old Art Center practice; a limited palette of black, burnt sienna, yellow ochre and white. This gives a neutralized version of each of the primary colors. It works well for doing value studies with a little color. 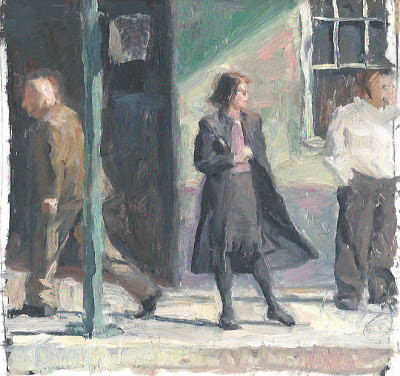 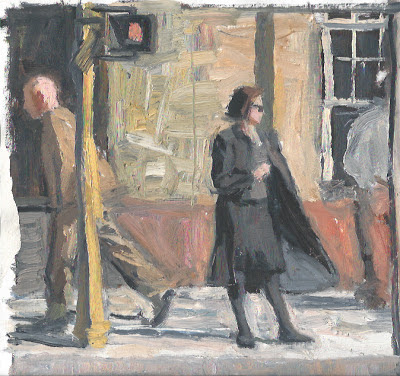 Posted by Allen Garns at 6:01 AM No comments:

Finding that miracle is why I paint, no matter if it's a figure, a landscape or an illustration for a children's book. My intention for this blog is to share my journey over the past 30 years as I have sought to observe my world. It covers a range of experiences from illustrating movie posters and children's books to painting en plein aire in the hill towns of Europe.